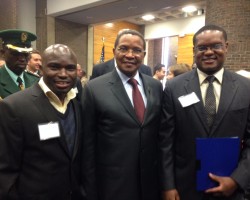 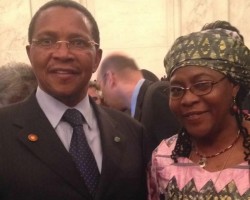 Dorothy Hodgson is a historical anthropologist who first worked in Tanzania as a development practitioner for the local Catholic Diocese of Arusha form 1985 to 1988. Since that time, she has spent over twenty-five years conducting research in Tanzania. Her work, and research, has focused on colonial and postcolonial development efforts with Maasai pastoralists; changing gender relations among Maasai; the experience of Catholic evangelization; and Maasai involvement with the international indigenous rights movement, among other topics. Currently she is completing a book manuscript that examines law, gender and justice in Tanzania.

She is also currently supervising two graduate students who conduct research in Tanzania:

Katie Orlemanski, a third year PhD student, who is studying the aspirations, experiences and challenges of girls’ education in Tanzania. Katie spent four years working with an NGO in Kenya that focused on girls’ education. Last summer, with the support of funding from Fulbright-Hays and other sources, she studied intensive Swahili, met with academics and activists involved in education projects, and visited prospective research sites. She now plans to spend one year in Dar es Salaam working with and studying several girls’ education project and conducting research with girls and their families in Mabibo.

Dunstan Matungwa, a new PhD student and a Tanzanian national, who plans to study female sex workers and HIV/AIDs in Tanzania. Dunstan attended the University of Dar es Salaam (Bachelor and Masters) where he also worked as a junior faculty member for a couple of years. He then moved to the National Institute for Medical Research in Mwanza as a Qualitative research coordinator for its five-year Sexual and Reproductive Health and Rights program and was later tenured as a Research Scientist. Dunstan is supported by a prestigious Fulbright fellowship and an Excellence Fellowship from Rutgers.

Finally, she is the faculty advisor for an undergraduate club, SHAREinAfrica (http://shareinafrica.org) that conducts fund raising projects to support girls’ education in Tanzania.

Robert Blumenschine, Professor Emeritus in the Department of Anthropology, conducted research for many years on the history of human evolution in Olduvai Gorge. From 1989 to a few years ago, he co-directed the Olduvai Landscape Paleoarchaeology Project (OLAPP) with Dr. Fidelis Masao, one of Tanzania's senior prehistoric archaeologist. OLAPP was composed of a large, interdisciplinary team that combined archaeological and paleoenvironmental sampling of discrete time periods at broad, landscape scales, with studies of modern ecosystems partially analogous to the prehistoric setting. During his time at Rutgers, Dr. Blumenschine trained many graduate students who conducted research in Olduvai, including Tanzania national Dr. Jackson Njau (PhD 2006), who is currently an assistant professor of geology and paleoanthropology at Indiana University in Bloomington (http://www.geology.indiana.edu/njau/index.html).

Gail M. Ashley's work focuses on sustainable water in East Africa, past and present. Providing freshwater to a growing population in Tanzania is a challenge, particularly under the uncertainty of global climate change. Her research in the East Africa Rift Valley has two components: (1) studies with paleoanthropologists at Olduvai Gorge and Laetoli on the water resources used by hominins millions of years ago, and (2) investigations of the modern water resources focused on rainfall, groundwater, and springs in the Lake Natron, Lake Manyara, and Lake Eyasi region. These areas have competing interests of tourism, herding (e.g. Maasi), agriculture, and hunting and gathering (Hadzabe). Her research is funded by the National Science Foundation and the National Geographic Society.

Richard Schroeder is author of Africa after Apartheid: South Africa, Race and Nation in Tanzania (2012).

Abstract: The election of the ANC government in South Africa in 1994 led to the widespread expectation that a new era of friendship and cooperation between South Africa and the rest of Africa was in the offing. If the citizens of former “frontline” states like Tanzania expected to join hands with comrades in arms from the days of the liberation struggle, however, they were in for a rude awakening: the thousands of white South Africans who followed their investments to Tanzania were not ANC stalwarts; these were instead the hated Boers (Kiswahili: makaburu), a group of whites whose experience of being white and whose historical relationship with African blacks were profoundly and ineluctably shaped by apartheid. Africa after Apartheid traces the history of Tanzania’s thirty-year involvement in the anti-apartheid struggle. It documents the rapid influx of South African capital into Tanzania and the region at large in the post-apartheid period, and examines the intense controversies that emerged as South African firms assumed control of many of Tanzania’s most prized economic assets. Intense competition for access to resources, the “loss” of tax revenues due to non-payment by foreign firms, the assertion of foreign “standards,” the denigration of Tanzanian national culture – these material effects and symbolic slights, both real and imagined, weighed heavily on Tanzanians as they watched South African presence expand. Meanwhile, the emergence of numerous de facto all white bars, restaurants and clubs managed and/or patronized by white “southerners” heightened racial and nationalist sensitivities all across the country. This book describes the historic encounter that ensued as Tanzanians were forced to confront their long-time enemies on Tanzanian soil.