In 1846, Gerrit Smith, a land-rich, deep-pocketed antislavery reformer from upstate New York, donated 120,000 acres in the Adirondack wilderness to 3,000 poor black men from New York. With these land gifts, Smith hoped to inspire a mass migration of black families from metropolitan New York to the northern frontier. His purpose was twofold. His land deeds would help his 3,000 “grantees” gain equal voting rights; since 1821, black New Yorkers lacking proof of $250 in landed property were not allowed to vote. And farming would ensure their economic independence and good standing in their new adoptive Adirondack communities.

The best-known enclave spawned by Smith’s initiative was Timbuctoo (also, Timbucto), a multi-family neighborhood in the hamlet of North Elba, near today’s Lake Placid. Timbuctoo would also come to stand for the black settlement effort overall, which had several outposts in Essex and Franklin Counties. In 1849, the sheep farmer and militant abolitionist John Brown, moved his large family close to Timbuctoo to help the black “grantees” build their farms. Ten years later Brown gained international fame with his bold and frustrated attempt to seize a federal arsenal in Harpers Ferry, Virginia, in order to arm slaves and incite a regional revolt.

The great majority of Smith’s grantees would not move onto their Adirondack land. But those who did won a lasting page in regional history for their friendship with John Brown, their early efforts at community-building, and their service in the Civil War. No visible trace of the black Adirondack farm colonies survives. Only a few headstones in local cemeteries attest to Gerrit Smith’s long-neglected “scheme of justice and benevolence” of 1846. 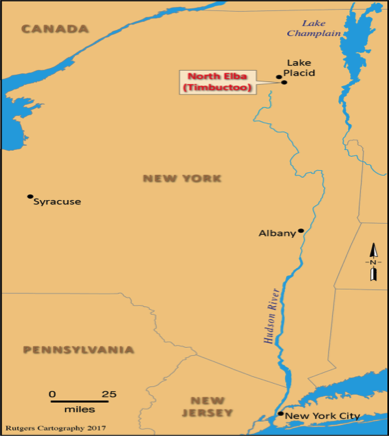